ArmorCritical is a concept based on a game called Attack Retrieve Capture (ARC) which was a free multiplayer, 2D computer game created by John Vechey (jv) and Brian Fiete (bf) as a college project and later published by Hoopy Entertainment in 1995. The game was primarily capture the flag (CTF), but other game modes existed. In the 2-team CTF mode, each team tried to capture the other’s flag(s). Players piloted small ships equipped with 4 types of weapons: lasers, missiles, bouncy lasers, and grenades. 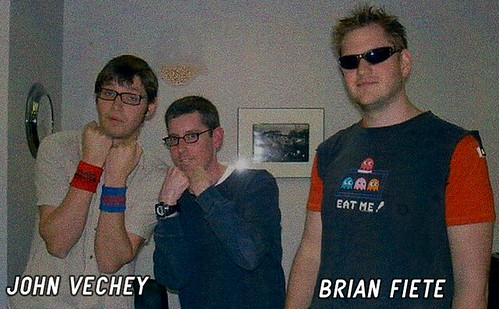 Initially ARC was hosted on a server rented out by Hoopy at Ulink.net, an internet service provider in Sacramento, California. Clients ran it via HFront (Hoopy Front End), a program downloaded to serve as the game to support multiplayer mode. The original developers of ARC, John Vechey (jv) and Brian Fiete (bf), took ARC to Total Entertainment Network (TEN) (now pogo.com) in 1998 for its 1.0 release.[1] In 1999, TEN went under and ARC appeared to go with it. But by December 1999, World Opponent Network (WON) had acquired ARC and began to run another beta test. During this time, WON attempted to make ARC a source of income, by adding advertisements into the game interface. However, the idea never got off the ground, and WON suffered the same fate as TEN in 2001. The future of ARC was again uncertain, but Sierra Entertainment bought WON which included ARC. This kept ARC going under much the same operation as WON had. A few updates were added to ARC but these were only security issues. In 2002, development was handed to a community member with the alias Err0r. Err0r resigned on April 21, 2005 [2] handing the lead administrator role over to Goose and Sonique, who were Co-Lead Administrators until Sierra eventually terminated ARC.

In 2007, Sierra Entertainment posted a news release on their website expressing intentions to terminate multiplayer support for several Sierra titles (including ARC) as of August 16th 2007. Fortunately, a player called Remote had begun developing a replacement clone of ARC, which in due time became known as Spark. Remote ran Spark on his Codemallet servers, alongside other games he had developed, Battle City and The Odyssey. In 2009, Remote decided that he no longer has the time to develop the game. As such, RareOps and Nas purchased the source. Since then the two of them have added two additional owners; namely, Halow and Assailant. Additionally, they have recruited over 10 developers, who have all participated in some way or another to progress the game. In the beginning, Spark looked and acted almost exactly like ARC, but as time wears on, and as new content is continually being developed by devoted players, Spark is beginning to evolve in new ways of its own.

In 2013 Spark was rebranded to ArmorCritical. It's release was web browser based but after a year or so there were several Java issues that led the developers to re-release a client version of the game.

Armor Critical is a free 2D top-down, team-based, internet-multiplayer game with compelling gameplay that is simple to learn but offers years of depth for the committed player.

There are 5 basic game modes — Capture the Flag, Deathmatch, Switches, Domination, and Assassin — and endless possibilities for game styles that are completely at the control of map makers.